The antenna has two beams of radiation. One in front of about 6-7 dBi and the second beam is lifted up by 10% with about 6-7 dBi gain. Modern warehouses roofing and ceiling are made of metal sheets or concrete, which greatly simplifies bouncing radio waves. One of the beams of radiation in these antennas cover the area of the hall "in front of" making it difficult for the propagation of the signal through obstacles or storage racks loaded with goods. The task of the second beam after reflection from the ceiling, is to cover the dead space between the obstacles (shelves). The antenna is specially designed to work in such conditions.This antenna is designed for installation in WAVE2 and the MU-MIMO multiplexing time-space technologies. The antenna operates in two frequency bands 2.4 and 5 GHz, offering excellent utilization of the radio spectrum. Specially designed arrays of radiators with low self capacitance guarantee correct operation with a high degree of encoding - 256 QAM, which is used in such systems. Low capacitance does not introduce blurring of digital signals and help to avoid appearance of parasitic currents and reflections. It is dedicated for indoor use, warehouses, production facilities.  We do not recommend using these antennas in open spaces due to the loss of the signal of the second beam radiation (in the sky). 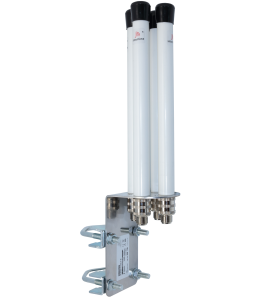 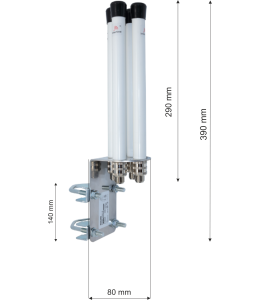